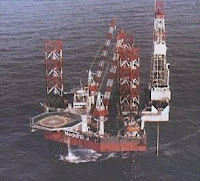 Jack-up Drill Rigs, as the name suggests, are platforms that can be jacked up above the sea using legs which can be lowered like jacks. These platforms, used in relatively low depths, are designed to move from place to place, and then anchor themselves by deploying the jack-like legs. 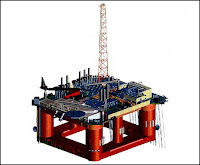 Semi-submersible Drill Rigs:  having legs of sufficient buoyancy to cause the structure to float, but of weight sufficient to keep the structure upright. Semi-submersible rigs can be moved from place to place; and can be ballasted up or down by altering the amount of flooding in buoyancy tanks; they are generally anchored by cable anchors during drilling operations, though they can also be kept in place by the use of dynamic positioning. Semi-submersible can be used in depths from 600 to 6,000 feet (180 to 1,800 m).

Drillships, a maritime vessel that has been fitted with drilling apparatus. It is most often  used for exploratory drilling of new oil or gas wells in deep water but can also be used for scientific drilling. It is often built on a modified tanker hull and outfitted with a dynamic positioning system to maintain its position over the well.
Labels: Drilling
Newer Post Older Post Home