The proposed East West Offshore Gas Gathering System (EWOGGS) Project being promoted by the Dangote Group consists of two 38-in, 550km pipelines, each with a capacity of 1.5 Bcf/day. The subsea pipelines will create a corridor for evacuation of trapped gas from offshore platforms in Nigeria to allow their monetization. Most of the associated gases produced offshore in Nigeria are currently being re-injected or flared. Hence the Dangote strategy is to serve as a transporter only, transporter and processor, or buyer for the producers of the gases. 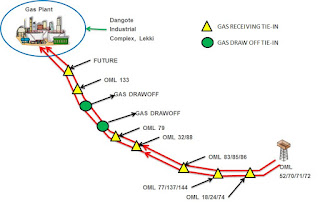 The two pipelines running side by side, will gather gas along a route off the coast of Nigeria, all the way from Bonny in Rivers State through Ogidigben and Olokola for delivery at a new build Gas Receiving Plant to be located at the Dangote Refinery Complex in Lekki, Lagos, Nigeria. The dual pipelines are capable of transporting a total of 3 bscfd of gas per day.

Dangote Industries’ expectation is that Nigeria should be able to utilize 10Billion cubic feet of gas per day, in its power plants and factories, by 2020. In the last 12 years, Nigeria has built over 10 thermal power plants with nameplate capacity in excess of 5,000MW, expected to be fueled by natural gas. The current gas consumption by factories, power plants and gas-based industries in Nigeria is slightly less than 2Billion cubic feet per day (Bcf/d). The main constraint to growth is mainly inadequacy in the supply of natural gas.

The list of acreages from which the EWOGGS is expected to extract natural gas includes ExxonMobil operated OMLs 70 and 138, Amni-operated OML 52, Shell operated OML 77, Sunlink-held OML 144 and First E&P held OMLs 71 and 72, in which West African E&P, a Dangote subsidiary, has significant stake. The starting point for the pipelines is a new-build platform in OML 72, gathering gas from the hub with OML 52/70/71/72. The pipeline system consists of 7 gas receiving and 2 gas off-take subsea tie-in points along the route.

From the outcome of the concept selection studies, the gas injection pressure is 80 – 120 barg, while the arrival pressure at Lekki is 45 barg. The pipeline specification is 38 inch (OD), ANSI 900, Grade X65 CS. The capacity of the Gas Receiving Plant at Lekki is 2 x 1.5 Bscf/d. Both the pipeline and gas receiving facilities would be installed in two phases, the first phase to be commissioned in September 2018, and second phase in February 2025. The first phase is expected to deliver gas for the use of Dangote Industries, including the proposed fertilizer plant in the refinery complex, and other identified industrial and power plant users. The second phase would be demand-driven, but is expected to include spur lines and connections to other offtakers including West African Gas Pipeline (WAGP), Ogidigben Industrial Park and Escravos – Lagos Pipeline System (ELPS).


The Engineering, Procurement and Construction, EPC, Contract for the Fertilizer Plant was awarded to Saipem of Italy. For the refinery project the award of Basic Engineering Design and Optimization has been made to UOP, of the Honeywell Group of USA, and award of Project Management Consultancy has been made to Engineers India Ltd, a Government of India Undertaking. Dangote Refinery will be the largest privately owned refinery in Africa. 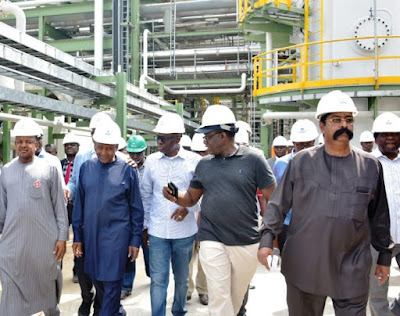 The other processing units at the refinery include the STRATCO® alkylation unit, the MECS® sulphuric acid regeneration (SAR) unit, the MECS® DynaWave® sulphur recovery unit, and the BELCO® EDV® fluid catalytic cracking unit. 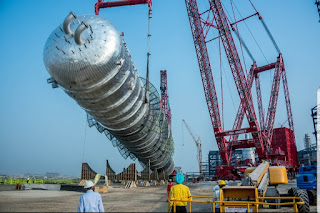 The refinery is designed to process Nigerian crude mix, African crude mix, Arab Light and some American crude. Hence, flexibility is built into the crude input, to minimize risks that may occur due to disruptions in Nigerian crude supply. Hence the refinery can handle not only sweet light crude, but also sour crude and heavier crude. 2 crude oil Single Point Mooring (SPM) buoys to be located within the deep sea  will be used for unloading crude oil from ships ranging from Aframax to Ultra Large Crude Carriers (ULCC).

In terms of sales, the petroleum products from the  refinery is expected to supply both the domestic and international markets, hence 3 product SPM buoys, also to be located within the deep sea  were designed to allow for evacuation of products to SUEZMAX vessels (tankers) to deliver to international markets, in addition to facilities provided to evacuate by road. Both the road and sea evacuation facilities are designed to be 75% each of the production capacity. The SPMs can be also used to supply other parts of Nigeria including Port Harcourt, Warri and Calabar via shuttle tankers. Some other marine-based projects related to the refinery project includes 2 x 48’ subsea crude pipelines with interconnections,  4 x 24” subsea products pipelines, and about 120 km subsea pipelines. The refinery products are also designed to meet Euro V grade, which is the highest standard in the world, hence they can be exported to any part of the world. The integrated refinery and petrochemical plant is expected to produce about 1 million tonnes of polypropylene in addition to the petroleum products.

The major contractors / OEMs engaged on the project are: 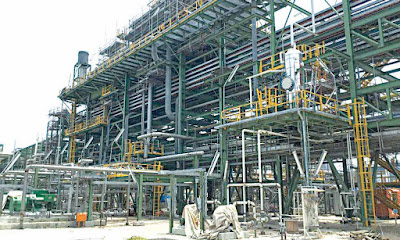 The Fertilizer Plant
The fertilizer plant consists of twin train, with each single train having a capacity of 1.5 million tonnes per annum of Urea and Ammonia which makes each of them the largest train available in the world. Hence the total capacity of the plant is 3 million tonnes per annum, and it sits on an area of 500 hectares. The test run of the completed fertilizer plant was done in February 2020. Operations at its new $2 billion granulated urea fertiliser plant at Ibeju-Lekki would begin in May 2020. The fertiliser plant would make Nigeria the only urea exporting country in sub-Saharan Africa and biggest producer of polyethene, which is capable of generating $2.5 billion annually.

The feedstock for the fertilizer plant is expected to be sourced from part of the gases from the twin 550km plant also being constructed by Dangote. However, if the gas pipelines is not ready by the time the fertilizer plant is commissioned, the gas being currently supplied by NGC to the Obajana Cement Plant in Kogi State will be diverted for its use, and the cement plant will be powered by coal. The plant is expected to cost about $2 billion. 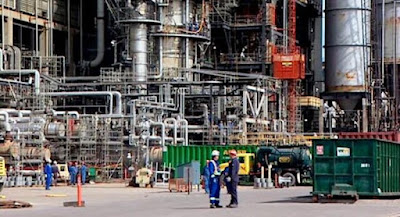 The Gas Pipelines andGas Plant
The gas plant will be supplied by two parallel 550Km gas pipelines, with the first phase 550km pipeline expected to start delivering gas by 2018. The subsea pipelines will create a corridor for evacuation of trapped gas from offshore platforms in Nigeria to allow their monetization. Most of the associated gases produced offshore in Nigeria are currently being re-injected or flared. Hence the Dangote strategy is to serve as a transporter only, transporter and processor, or buyer for the producers of the gases. The gas pipeline will run from Bonny through Olokonla to Lekki in Lagos. The gas to be processed will be treated at the Gas Processing Plant which will also be located within the Dangote Refinery Complex.  The gas plant can generate about 12,000 Mega Watts of electricity, more than what the nation requires, hence the excess will be exported to neighbouring countries.
The pipelines can handle up to 3 billion standard cubit feet (3 Bscf/d) of gas per day which is about the same volume currently exported by Nigeria, and three times the volume supplied to the domestic market now. It is also noteworthy that the current gas requirement to meet the power needs of the country is 2 Bscf/d. The gas pipelines will cost about $3 billion.